Let’s start with why… #girlbosses rock

Happy International Women’s day to all the #girlbosses out there who are strong and fierce, compassionate and reflective. As much as we are equal to our male counterparts, we are undeniably different at times when it comes to our approach in the workplace.

Yesterday I attended the ‘Start with Why’ Leadership Forum featuring Simon Sinek and was lucky enough to have a few moments one-on-one with him to thank him for the guidance and positive affirmations his talks provided. I was especially grateful for his emphasis on empathy and compassion when it came to matters of business. I shared that I doubted my “feminine” instincts and interactions at times, which was heightened by recent feedback from a leader I looked up to that my management skills were “too soft” and I needed “hardening up”.

In awe of the momentous occasion of actually connecting with one of my business idols, in the flesh, one on one, I may have missed a few crucial moments of the conversation due to a #fangirl lapse of excitement, but I tuned back in to reality to hear him say “…but you don’t have to be an arsehole. It’s fine to have high standards, but don’t be an arsehole about it.” Spoken in real terms and followed up with some raw advice. “Just be yourself. It’s not about being soft; it’s about being human. Just be you.” 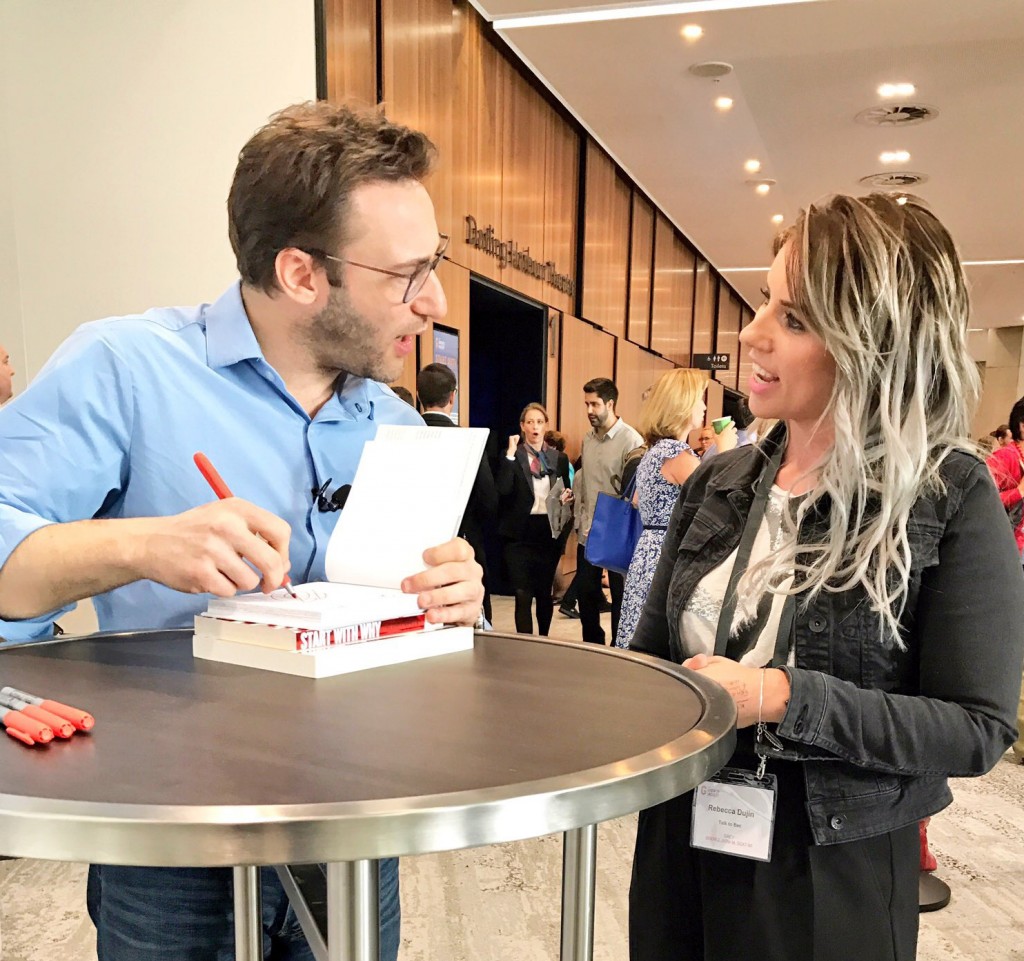 Returning to the seminar I was pleased that the topic of gender was revisited. Were there enough women in leadership roles? Sinek seemed to think so. He offered that perhaps, it wasn’t that we needed more women in leadership, rather more leaders that act like females. And us ladies just happen to have an advantage because hey – we’re naturally better at it. Were women perceived as “soft” in comparison to their male counterparts? Most probably, according to some of Sinek’s anecdotes, as perceptions of gender roles do elicit different responses from the same messages. In fact, he confirmed that there was “no question” about the double standards of leadership between men and women.

A question from the audience posed the scenario that being a new mother meant you might not be able to “give” as much or “be” as much to your work. Simon disagreed. He argued that as a mother (or as a parent in general) women inherently understood one of the most important characteristics of being a leader: they need to put the lives of others ahead of their own interests. They had to sacrifice themselves for the thankless and unseen, with often no reward beyond unpredictable hits of serotonin when our children or team achieve or accomplish something because of the support and guidance we have provided them. Sinek went so far to suggest that the parenting book “How to Talk So Kids Will Listen and Listen So Kids Will Talk” would be just as useful for leaders as it would for parents.

Another anecdote that Simon shared during the discussion was the advice a senior female figure in his early career told to him. She explained that mothers just have to get used to the idea that they’re always going to disappoint someone – it might be their company, their kids or themselves – but they had to let themselves know it was OKAY for this to happen and get comfortable with it, given it would be inevitable. This is something that I know a lot of women struggle with and that I too one day will face. But the message is that we need to be nicer to ourselves and offer the same empathy and understanding to ourselves that we would grant to others.

There are a few things, that as women, we are just better at. We trust our instincts. We nurture those around us. We care about feelings and consider our perception. We understand and practice daily the sacrifice of our time and energy for others ahead of our own tasks.

If we consider traditionally perceived masculine traits of decisiveness, action-taking and assertiveness alongside with feminine associated traits of empathy, compassion and intuitiveness it’s a no-brainer that good leadership is actually a balance of the two. Human leadership. Not soft, not hard, but human. Trusting our guts instead of the figures and handling the tough decisions and making sacrifices and genuinely caring for people.

“Leadership is not about being in charge. Leadership is about taking care of those in your charge” – Simon Sinek.